What a difference a day (week) can make!

We went down in an epic game against last year’s premiers, Royals, 42 – 50. A bit of ball security and better posting up around the ruck and it might have been a different score line! 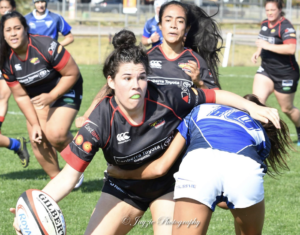 Nakiya Smith looks for an offload

That aside. This is the best the girls have played – EVER! They tackled like demons (Sophie “Tricky” Tricolas chopping down more than her fair share) – , ran with purpose (Rach Brown made many metres in a lot of traffic) and left nothing in the tank at the end of the game. Shayna Siakimotu could hardly get off the paddock at the final whistle after all the big tackles and ruck support she did!

It was a see sawing affair with Royals getting off to an easy start with a try resulting from a spilt ball when we were running it out from our 22. Got to watch our Ball security girls!

Sammie “Woody” Wood, our Women’s Brumby representative, hit back for the good girls and converted it after 5 minutes to even it up. 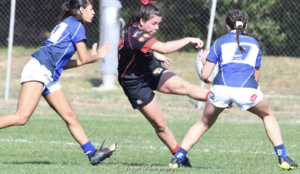 Sammie Wood gets her boot to the ball

Royals then got a try from near the ruck and converted.

Tia Baxter then scored twice in quick succession from a scrum and ruck scoot (both converted) to put us in front.

Royals then scored again to close the gap.

The arm wrestle continued with Woody scoring again after a bustling 35m run from Rach Brown. Again converted for us to go in ahead at half time 28-19!

Royals started the 2nd half well and scored 2 unanswered tries in the first 10 minutes.

Ellen Anable hit back with a try (converted again by Woody).

Royals scored 3 tries in quick succession and we were now behind. But the girls never gave up.

On fulltime, Ash Dobson went for a bustling run down from the 50m to their 22m on the right, offloaded to Rach Brown who ran strongly again to score a well-deserved try. Converted by Woody (who kicked magnificently for a 6 out of 6 effort). 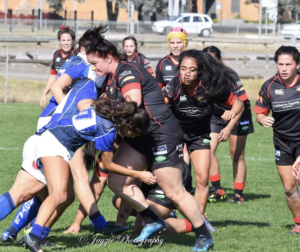 Ash Dobson hits it up against the Royals defence

That was all! But what an effort! Everyone had done something good! Nera Wright wreaking havoc every time she got the ball, Ari Glass tackling strongly on the wing, some great ruck work by Jackie, Shelby and Ash.

We can only get better from here with that sort of effort!

3s go down in narrow loss to Royals

No Replies to "Eagles women lift in resilient effort"