The Baldies headed out to Boorowa for their clash against the Goldie’s on Old Boys Day. The piercing sun on an unseasonably warm afternoon was only one of the elements the boys had to contest with on the day. The running commentary from the sideline was constant and helped kick-start the day for Boorowa, with two quick tries to start the game, the Baldies were 12-nil down before they knew it.

The boys kicked into gear, knowing they had points in them as exhibited the week before, knowing if they could stop the flow of points and build some momentum, the game was by no means lost. This game required a different strategy from the usual grinding game that the Baldies are attributed to. Boorowa has some serious pace in the team, finding the gaps and taking full advantage of their pace down the wing.

In an effort to outdo the controversial penalty counts seen in the NRL, a soaring number of penalties resulted in a struggle to gain some momentum with the ball and build pressure. Eventually, Boorowa had a player sent for a ten-minute rest in the middle of the second half. Additional injuries to the Boorowa front row meant a second half with uncontested scrums. This was unfortunate as the strength and drive of the scrum is one of the Baldies key advantages on the field. 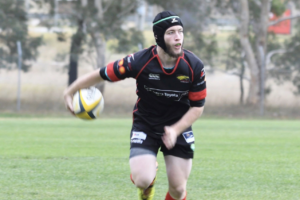 Barry Stringfellow, aka the Flash, stepped up knowing this was his game to shine. Taking an absolute blinder of a catch mid-flight, his pace and strong inside step saw him racing down the sideline (in front of a very proud cheer squad) and score in the corner. Other strong efforts that inspired the comeback included Joe Loeschnauer who had an uncanny ability to be in the right spot at the right time for an offload who ran 30 metres to score his first try of 2018. Big Ben Stuart was the other to cross the line for his maiden Eagles try with a strong, hard run through the middle.

Unfortunately, the Baldies were unable to overcome the deficit despite their best efforts, going down 32-17.

Next round, the Baldies will be back at the nest to face Jindabyne in what will be a tantalising fixture if the preseason trials are anything to go by.

No Replies to "Baldies go down in tight Boorowa contest"