2018 was a record-breaking year for the Old Gold Eagle. The highlight figure from the year was achieving exactly 350 registered players across the senior and junior clubs. 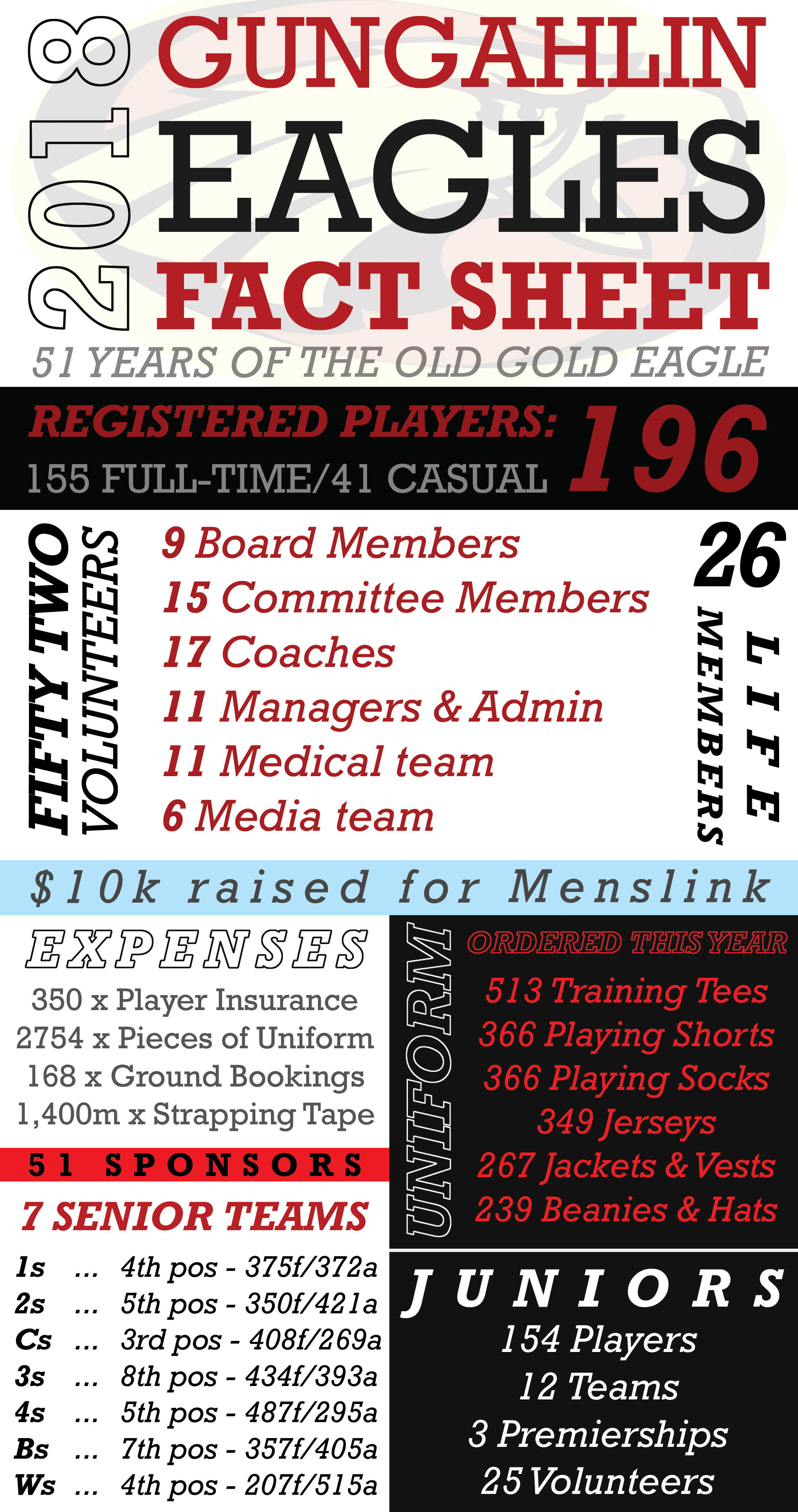 The numbers spoke for themselves in 2018.

The Red & Black Ball was held on Saturday 8th September at the Rex Hotel and saw a record turnout of 231 guests in the form of players, volunteers, life members, sponsors, old boys, friends, partners, and parents. Many presentations were made, and many awards announced. 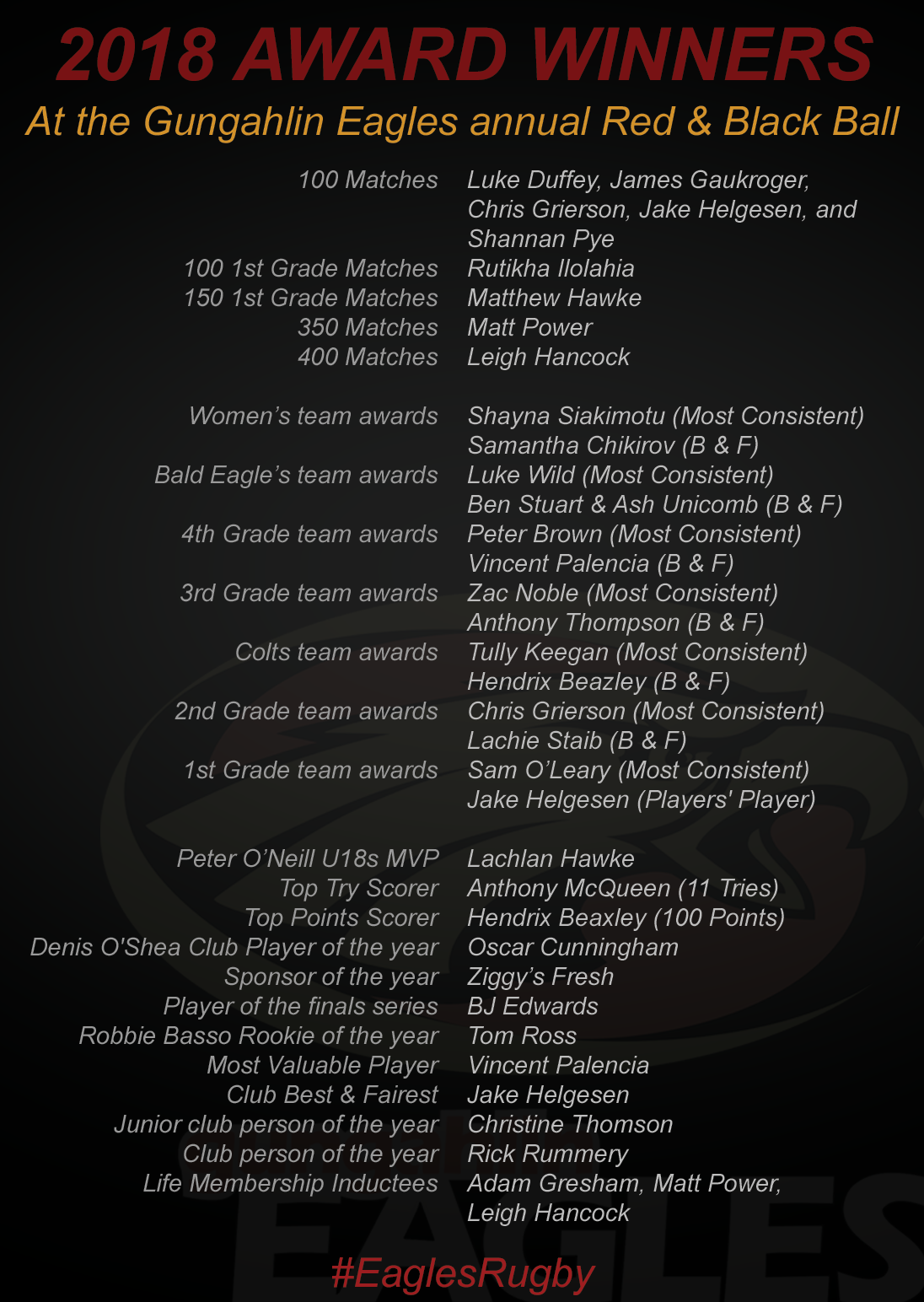 We know the club is in good stead when our juniors make four Grand-Finals and go on to win three Premierships (U9s, U12 Div 2, U12 Div 1). It was a major goal of the Eagles Board to bring the senior and junior clubs closer together, which we’re proud to say we’ve accomplished with the great work of Peter Johnson and his junior club committee.

Another key indication of the club’s strong position in Canberra Rugby came at the Brumbies Rugby MacDougall Medal awards night; winning the MacDougal Medal for Best & Fairest in Canberra Rugby (Jake Helgesen), the HS Quinn Trophy for Services to Rugby (Linda Rummery), and the U20s Player of the Year (Tom Ross).

It was pointed out by the club’s General Manager, Trent Pollard, that to effectively organise and execute one rugby season of a club our size, costs roughly $250,000. The generous support of our 51 sponsors and corporate partners is the real reason the Eagles are thriving as a large community organisation. It is critical that all Eagles members and supporters recognise, and give back to those who keep the club financially viable.

The Eagles have a wealth of great people and there is no doubting that, however, the club can only exist and grow underneath great leadership. Club President Eoghan O’Byrne, Vice President Peter Johnson and their Board, have done a tremendously well to navigate the club through many ups and downs, and have done an outstanding job to set the club up for coming years. We must also commend our player leaders; club captains Chris Grierson and Mitch Ward have been instramental in representing the playing group and organising many events and gamedays.

Player welfare was a big ticket item for the Eagles’ Board and Committee members in early 2018, which is where the new role of ‘Senior Medical Officer’ was born. Linda Rummery has filled this position in 2018 and has done an outstanding job to track and manage the administration of every injury throughout the season. This data will be utilised to better inform future rugby programs and will be an extremely important source going forward.

It was a key point in the President’s address at the Red & Black Ball that major success is well within reach. Club coach Dan Atkins and his amazing team of coaches, managers, trainers, and medics should all be commended and congratulated on the season they’ve had. Keeping a list of 196 players inspired and fit to train and play week in, week out is a great achievement in itself and you should all be extremely proud of your contributions.

Some highlights of the year just had to be the special events that were held. From the inaugural Family Day with a jumping castle and face paint to the oh so memorable Heritage Round where we defeated Royals in front of our old boys in historical Eagles jerseys. We celebrated the history of our country and the land on which we meet and play on in our recognition of country at our first home game, and we supported one of the great local charities in Menslink on Charity Day where $10,000 was raised which will change the lives of ten young Canberrans.

Our engagement with old boys in 2018 has been incredible and we thank newly appointed ‘Old Boys Captain’ Tim (Kegs) McGrath for his efforts in this regard. Our former players play a pivotal role in the current strength and culture of the club and we can only hope it continues to grow.

Finally, the club would like to once again thank and congratulate the 24th, 25th, and 26th Life Member inductees, who are Adam Gresham, Matthew Power, and Leigh Hancock. Thank you for being such great ambassadors both on and off the field for so many years. Your passion, your integrity, your ongoing commitment through good times and bad is truly acknowledged, appreciated, and undisputed.

Planning is underway for the 2019 season and we’d like to urge all Eagles members to save the date for the Annual General Meeting. As always, we’re looking to bring on new volunteers and establish the leadership of the club for the future. The AGM will be held on the night of Wednesday 31st October. More details on this to come.

Also coming up on the Eagles’ calendar is the annual Golf Day (November) Rugby Tag competition, ‘Los Huevos De Oro’ so keep your eyes and ears out for more information.

Well done to all involved on another great year for the Red & Black.

Up the Old Gold Eagle.

No Replies to "End of Season Wrap-up"