The Gungahlin Eagles Junior Rugby Union Club is set for a big 2018 with new President Peter Johnson ready to go above and beyond for the year ahead.

Former President of the junior club, Darren Smith, has done an outstanding job in getting the young Eagles to where they are today, and will still be involved at the club imparting his wisdom on the junior committee. 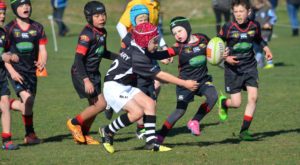 A young lady Eagle fends off a defender in the 2017 season.

Eoghan O’Byrne, club President, has made clear the importance of participation and ensuring the junior and senior club are aligned and seen as one. Peter’s existing position as Vice President will remain, which is a desirable outcome at such a crucial time for the Eagles.

The new junior President wasn’t shy in announcing his ambition to see a team in every junior age group representing Gungahlin next year.

Peter has been a key contributor to the club for 21 years and has fulfilled almost every volunteer position in that time, and he says if we get the next few years right in terms of participation, the Eagles can truly become the benchmark sports club in Canberra.

“I’m truly excited about what lies ahead for the junior club, and couldn’t thank Darren enough for his efforts to date,” Johnson said.

“We’re in a position where participation for young boys and girls in rugby is positive, and we’re located in one of the fastest growing areas of the country. There is so much potential for us to strengthen the sense of community at the Eagles, and the players and their families are obviously central to facilitating and developing that.” he added.

Peter’s first role will be establishing the junior club committee, which will be appointed in due course.

If you, or someone you know, would be interested in helping Peter on the junior club committee, please send your expression of interest to admin@gungahlineagles.com.

Player Welfare the focus for Eagles in 2018

No Replies to "Eagles Juniors soaring onwards and upwards"