The Gungahlin Eagles are pleased to welcome home Mitch Connolly in 2018 as he joins the coaching staff as a first-grade assistant coach.

The former Gungahlin Captain has compiled over 150 games for the club and has also notched up 100 games in the top grade.

Connolly has bled red black since his early days as a Daramalan youngster and is now looking to encourage the next breed of Eagles youth.

Mitch wants to bring the success and excitement back to the club that he experienced in the early 2000’s when he first started at the club.

“I’m most excited about being able to impart some of my wisdom that I have been so blessed to receive from some truly great coaches,” Connolly said.

Connolly will bring a lot of experience and knowledge to the club, whilst also creating a vision for success.

“I want to try and bring more fluidity and cohesion in general play, similar to the style that the All Blacks are playing. I think that is where Rugby as a whole needs to head,” Connolly

“It’s a great culture and we have the players. We just need some silverware to follow.”

He will join a long list of new coaches at Gungahlin as the club looks to bolster their coaching force for 2018.

Damian Ross will also be continuing as Colts assistant coach in 2018 after enjoying a strong first year at the nest. 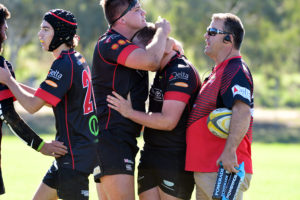 The Wests junior progressed through the grades and went on to play over 100 senior games for the club in the 90’s.

Ross is now focussed on progressing the next generation of Eagles Colts into potential first-grade regulars.

‘It’s exciting to see the growth of the club and watching players progress through the grades from Colts level,’ Ross said.

Quite like Connolly, Ross agrees that Gungahlin needs to play a more expansive game if they are to contend with Royals and Vikings.

‘We need to look at offloading into contact and improve on that,’ Ross said.

‘[In first Grade] Vikings rarely have two bad years in a row, so I think they will be hard to beat alongside Royals.’

Player Welfare the focus for Eagles in 2018

No Replies to "Eagles coaching panel boosted by Connolly and Ross"