Since 2004, the name Ben McGee has caused havoc around Canberra Rugby, and in 2017 he was able to claim that elusive premiership.

McGee has played across 13 seasons for Gungahlin, which includes 150 first grade caps, but now being a father, Ben finds his services more useful in the lower grades.

The 31-year-old’s rough and competitive nature makes him a man you would want to be alongside rather than against.

It has been 14 years since Gungahlin Eagles held any sort of silverware, but in 2017, their Third-Grade side broke the drought with Ben McGee playing a massive role in their success.

“The Third-grade team that I played in was just outstanding. They were just a great bunch of men that wanted to play for each other, which really is why we play footy,” McGee said. 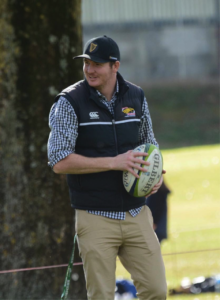 In 2018, McGee will move into a more dynamic coaching role in the club to further enhance the Eagles lineout.

When asked about how much he loves lineouts, McGee responded that they were ‘probably on par with [his] wife and child, maybe just below’.

“My dad always said that I was a student of the game and I really liked that aspect,” McGee continued.

“With all the strategies and statistics that run around in rugby these days it allows you to dismantle a team before you even play them,”

2017 was a superb year for McGee as a player and a coach. Along with his first premiership in Eagles colours, he notched up 200 Grade games for the club and was the forwards coach of the ACT schoolboys historic campaign at the National championships.

Now McGee is focussed on the Gungahlin Eagles 2018 season and can see many positives about what lies ahead.

“We’ve kind of been on the cusp of doing really great things within ACT rugby and I think that we have the direction, strategy and coaching to do that in 2018.”

“Having Ruaidrhi [Murphy] there will be a real asset to the club. Dan Atkins is a big picture coach who is always thinking about the club and what is best for the club, where Ruadrhi is into the more specific parts of the game.”

McGee is proud of his efforts at the club and has accomplished what not many people have, but he won’t rest until First Grade take home a premiership.

No Replies to "McGee still hungry for success"