Known to few by his actual first name, Vatiliai ‘Patty’ Tuidraki will fly the nest from the Gungahlin setup after signing a two-year deal with professional Japanese club Toyota Verblitz.
Since teaming up with an agent last year, rugby in Japan was always on the cards for Pat, mainly due to the bizarre family history Tuidraki will return to. Pat’s late father, Patiliai was a former Verblitz player himself, and Pat’s godparents being Japanese has helped him practice the language that he learned whilst growing up in Japan.

He was initially offered a development contract by rival club the Panasonic Wildknights, which he strongly considered until the Verblitz got wind of the offer. Once Pat has sorted his visa he’ll be straight on the plane, which could be anytime in the next three to six weeks.

The contract means Pat will no longer run out alongside his fellow Gungahlin teammates, to prevent the risk of injury and losing his contract, however, he will still attend training to get one last taste of Canberra Rugby before he goes.

The biggest challenge ahead of Pat is adapting once again to a new lifestyle, and even though he’s experienced life in Japan before, it’s been over ten years since then.
Tuidraki has experienced rugby in Fiji, New Zealand, Australia and will head to Japan with a keen intent to learn. Whilst his time at Gungahlin was a brief two-and- a-half years, he attributes most of his development to his adopted home club, the Eagles.

“As a player I didn’t really grow until I came to Gungahlin, coming in 2015 was a great year for me. It was probably a blessing in disguise, the club was looking to rebuild and just to be a part of that rebuilding process and build myself as a player and my character as well. ” Pat said.

“I credit this contract to Gungahlin… I could never thank the club enough for all of this.” he added. When asked about various aspects of the club he’ll miss the most, and which people had the biggest influence on his time here, Pat’s eyes swelled, and a subtle grin grew as he accumulated a list in his mind.

In interviews gone by with the Canberra Times and the Echo Sports Network, it was well document that Pat’s ambition of one day playing in a Rugby World Cup would only come if his focus was to learn anything and everything that he could. Now that a career in Rugby is within reach, his philosophy remains unchanged.

“For me it’s still all a learning process, I can’t really pinpoint what I want to do at the end, but it’s always
been a dream to play in a World Cup, but there is always steps that I have to take along the way and this is just one of those steps.”

“I’ll just look to continue developing my game and become the best player that I can be, and hopefully represent Japan, Australia, New Zealand or Fiji, there’s four options now” He said with a laugh. Pat won’t be without familiar faces nor will he be the only Canberra Rugby import; as former Brumbies and Springboks coach Jake White signed with the Verblitz as head coach for the 2017 rugby season set to start in August. Pat knows he’s in good hands, especially after seeing former Wallaby back-rower Wycliff Palu represent the same franchise in 2016. 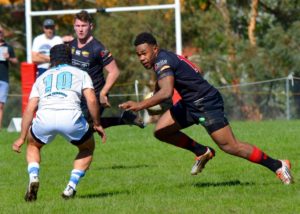 No Replies to "Tuidraki credits Japanese contract to the Eagles"