From the ring to the ruck

The Eagles’ very own Kane Broadrick has an alter-ego that opposition will not want to meet in 2018. His name is Mikey.

The 3rd-grade premiership winning captain of 2017 has become a cult hero of the Eagles for multiple reasons, but none more recognised than his unparalleled ability to pull off budgie smugglers and black leather boots.

Kane is not only a star of the Wrestleclash production as a wrestler, he also coordinates the Canberra events. Including this Saturday’s show at the Woden Hellenic Club, of which only few tickets remain (can be purchased here. Use discount code rugby2018). 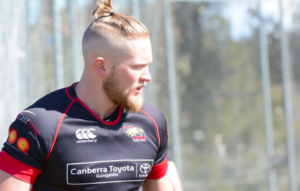 Kane in the 2017 grand-final win over the Vikings.

Even though the ongoing stress of running the event can hinder his focus on other aspects of life, he credits the Eagles for keeping him going.

Broadrick says “It is extremely humbling to have such a strong and supportive club get behind one of their own. Especially in a non-rugby environment such as pro wrestling. From day 1, everyone in the club has offered a hand to help try and create such a massive event. I look forward to seeing them all in full force come Saturday Night,”

“At the moment, the life balance is somewhat difficult. Wrestleclash is a full-time job, so not only am I taking part in the event, I have been organising every other aspect of the show. From booking talent, logistics, and marketing, to sound and lighting, venue set up/back down and meetings with the media,”

“I am looking forward to getting right back into preseason and having a massive year with the Eagles. Then giving 100% of my time to my 8-week old bub, Elsa,”

Be sure to head out to the Hellenic Club, Woden on Saturday, March 2nd to cheer on our very own Mikey Broadrick.

Brothers in arms, the family club

No Replies to "From the ring to the ruck"