Ruaidhri Murphy will be striving for Gungahlin Eagles glory alongside head coach Dan Atkins in 2018.

The 30-year-old Irishmen has climbed the coaching ranks from the Brumbies under 20’s to currently being the Canberra Vikings forwards and attacking coach.

Murphy managed 29 caps during his three-season stint with the Brumbies and despite heading home to Ireland for a short period, he returned to operate a coffee shop in the heart of the Canberra University.

The former Brumbies front-rower is excited to take the Eagles first-grade side to new heights in 2018 and make Gungahlin a real force to be reckoned with.

“I’m bouncing out of my skin to get started. This is a group with a great blend of youth and experience and that excites me,” Murphy said.

When Ruaidhri isn’t making coffee at his beloved café Nomad, he is constantly thinking about rugby and how to master the game.

His work with the Canberra Vikings has been nothing short of impressive, with the side taking minor premier honors and mustering together 353 points in 2017, the most of any team in the competition. 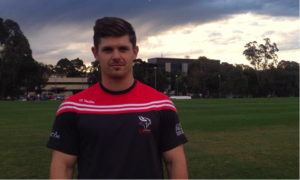 Murphy is the Forwards and Attacking coach of the NRC Minor Premiers – Canberra Vikings.

“It’s been a great experience coaching in the NRC. I have learned and grown a lot as a coach by being immersed in a professional environment,” Murphy said.

“Looking towards the future, it will be great to get stuck into some work with the Eagles and see where this group can get to, and I know I share this excitement with the other coaches.”

After a strong season with the Gungahlin Eagles Colts in 2017, the club will look to nurture the young talent that already exists and grow depth throughout the grades with Murphy’s support. 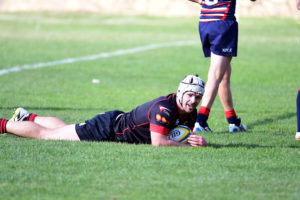 Murphy scores for the Eagles in Round 4 of the 2017 season.

Club President Eoghan O’Byrne doesn’t underestimate what Ruaidhri brings to the club, and is delighted to announce his appointment.

“Ruaidhri will be an asset to our club and our people, as he has already proven to be for some time now. His rugby knowledge and experience combined with his ability to relate to people and be a genuine mentor is truly inspiring,” O’Byrne said.

“Dan (Atkins) and his coaching team, alongside our management and committee, have done wonders to get the Eagles to where we are today. Add Ruaidhri to the mix in a prominent coaching role and we’ll go from strength to strength, our supporters and sponsors have so much to look forward to,” he added.

The announcement comes just a week after Mack Hansen was named Development Officer of the club.

Mack and Ruaidhri will both be in action this weekend as the Canberra Vikings take on the Perth Spirit in the Semi-finals Saturday night.

No Replies to "Ruaidhri Murphy signs on for 2018 coaching role"